UD Pocket boots IGEL OS on your computer. However, it does not make any changes to the operating system already installed on the hard disk, SSD, or flash storage – UD Pocket runs entirely from the USB stick.

UD Pocket has a partition which contains this manual and is readable under Windows. The manual describes setting up and starting UD Pocket on your computer.

This manual applies to UD Pocket and UD Pocket2.

In order to use UD Pocket, your computer must meet the following requirements:

For the list of devices supported by OSC and UD Pocket, see Third-Party Devices Supported by IGEL OS 11.

UD Pocket works on systems with BIOS and UEFI.

It is essential that your system supports booting from USB storage media. This may already be enabled, or you may have to enable it yourself. The required key presses for this may vary from vendor to vendor. However, here are some hints:

While the device is booting, try pressing [F12] (in general), [F10] (Intel devices), or [F9] (Hewlett-Packard devices) in order to access a list of boot devices and select UD Pocket.

If the above does not work, access the BIOS settings via pressing [Del], [F1], or [F2] during boot and activate booting from USB storage media and/or change the boot order.

See the BIOS/UEFI documentation for your system for details on how to boot from USB storage media.

On secured-core PCs (see e.g. https://www.microsoft.com/en-us/windows/business/devices?col=secured-core-pcs), it is necessary to change the UEFI boot settings to „Microsoft 3rd-Party UEFI CA“ in order to start the IGEL OS. It is required since by default, the UEFI only trusts Microsoft's 1st-party signing key for Windows, not the 3rd-party signing key that Microsoft uses to sign the IGEL OS. 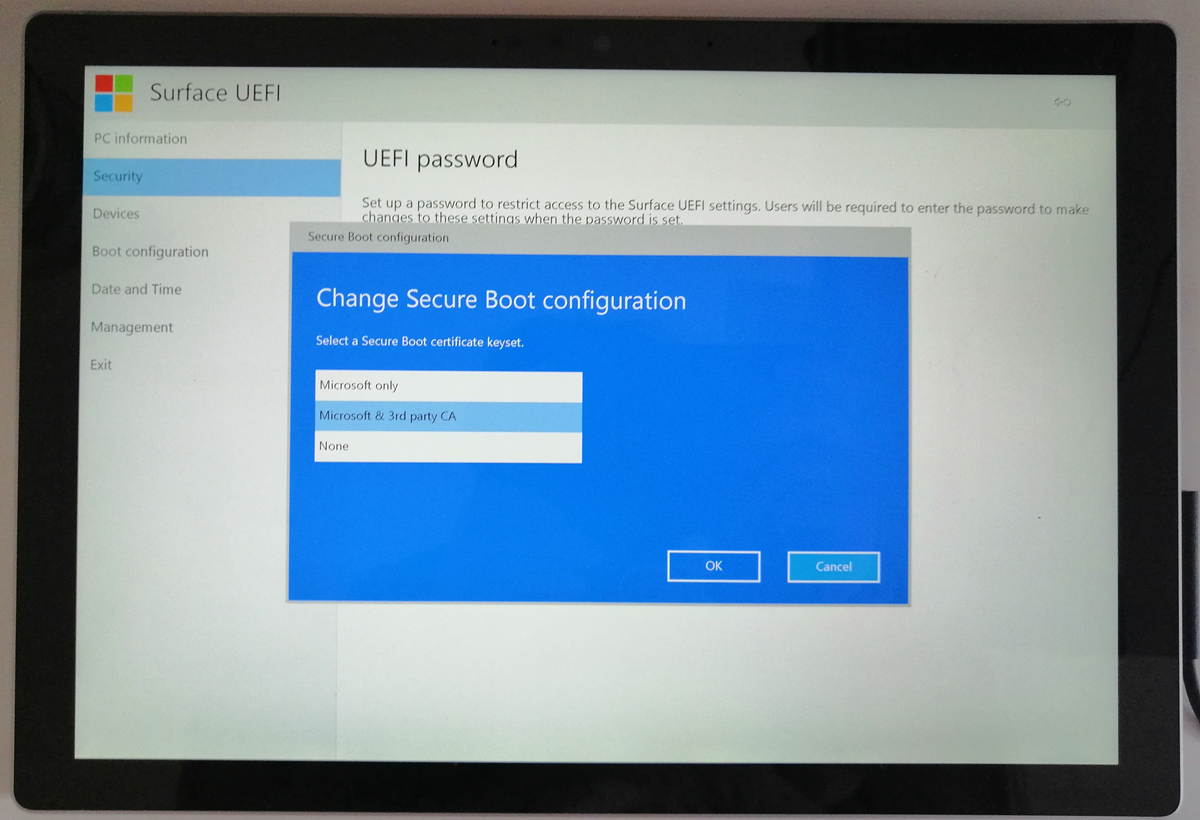 IGEL OS supports UEFI Secure Boot. Refer to the manual of your device's manufacturer to learn whether your device supports Secure Boot and how to enable it. Enabling Secure Boot often consists of two steps. First, the boot mode has to be changed to UEFI Boot in the BIOS; after that, Secure Boot can be activated, also in the BIOS. How to check whether Secure Boot has been properly enabled, you can learn under Verifying that Secure Boot is Enabled.

If UD Pocket fails to boot in UEFI mode, try it in legacy/BIOS mode. If this does not help, try another endpoint device to verify that the UD Pocket is functional and/or check for BIOS updates for your endpoint device and for the latest IGEL OS updates.

Do not remove UD Pocket from the computer until you have shut down the IGEL OS contained on it. Otherwise, you can damage the operating system on UD Pocket and lose your settings as well as data on other removable media.

Should the UD Pocket Boot-Up Fail

If the device does not boot into UD Pocket, but into its pre-installed operating system instead, change the boot settings appropriately. For further information, see "Boot Settings" above.

After the First Boot-Up

How to Reflash Your IGEL UD Pocket